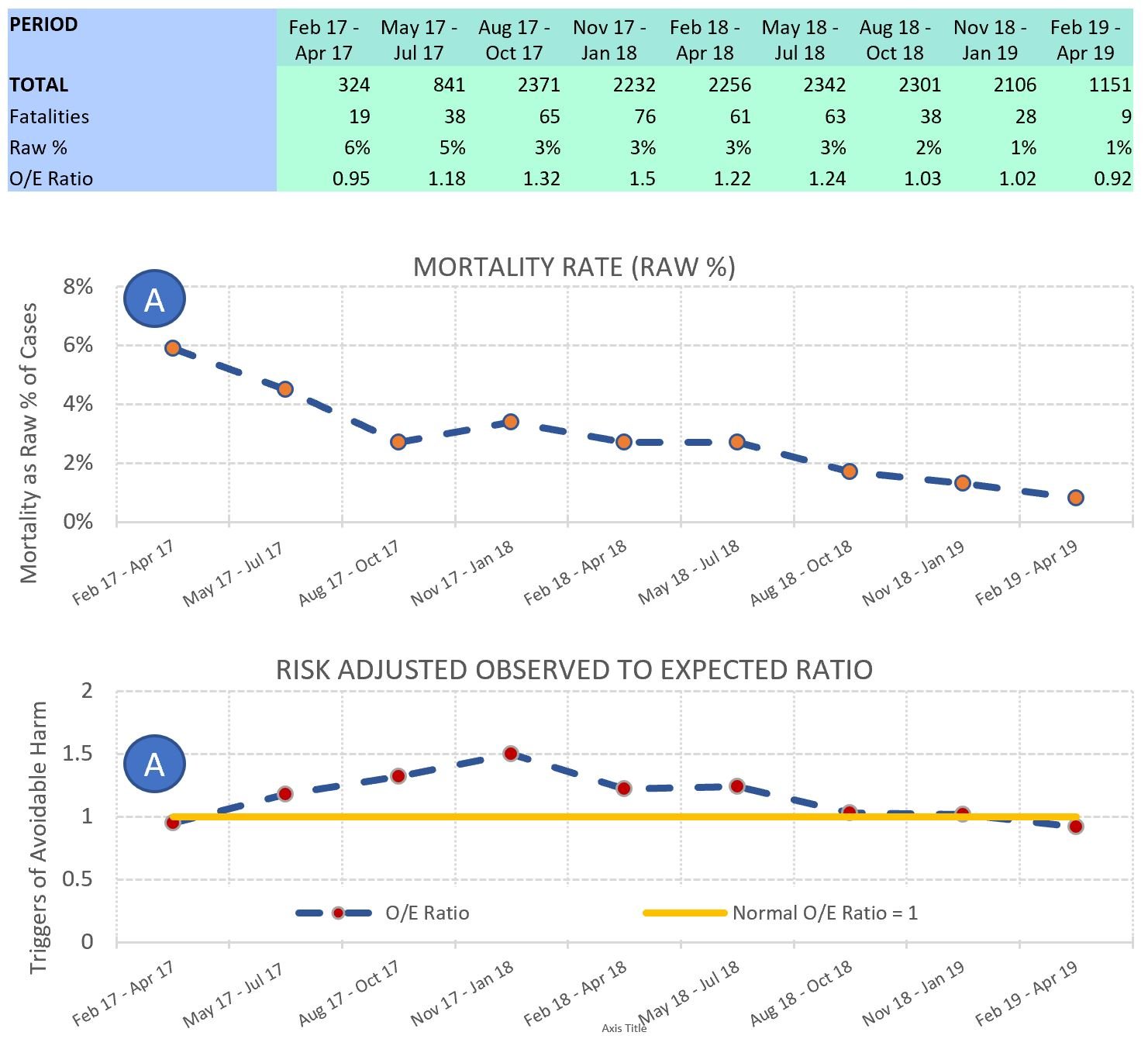 Mortality Review Groups are an essential part of routine clinical governance these days. They are successful thanks principally to the engagement of a large number of clinicians who are committed to improving patient care and so give up their time to attend the MRG meetings and present their specialty mortality reviews.

The detailed case note review that underpins this is undoubtedly a good way of detecting and learning from adverse events. However, it does not give Trusts a gauge of their outcomes as a whole organisation, nor does it easily allow them to track the results of quality improvement or signal where there may be systemic problems that need attention.

For this reason, national measures of trust mortality (HSMR and SHMI) are generally also added to the agenda for MRGs to consider.

CRAB is a sophisticated new Index of both mortality and, more importantly, morbidity and avoidable harm. The CRAB system is an essential supplement designed to explain, diagnose or corroborate the high-level mortality indicators with more detailed reporting and root cause analysis.

In the featured image, you can see how our approach that risk-adjusts for each individual patient’s physiology, complications and prospective operation/procedure.  At A, the raw mortality rate might suggest an issue but our assessment shows that at that point, the case-mix was more challenging and our observed to expected ratio result was acceptable.  Later on, our O/E ratio spikes, showing an internal problem that we then highlighted to the hospital.

Here is a brief overview of the methods and approaches behind HSMR, SHMI and CRAB.

HSMR is produced for all acute non-specialist trusts. It counts deaths in hospital from national HES data which is submitted from each trust to the CCGs and also to an NHS data clearing house.

The expected number of deaths is calculated by applying the risk of death from diagnoses in gender and age groups in a standard population i.e. all hospitalized patients in England and applying that risk to the groups of patients within our population with the same diagnoses, gender and ages. There are around 2000 different groups accounting for all age groups and diagnoses. (and 2 genders)

This doesn’t include all diagnoses and therefore in theory only 78% of deaths. It uses HES data alone so it does not pick up deaths after discharge. It does, however, look at all in-hospital deaths (i.e. including those after 30 days)

HSMR does not take into account severity of illness or risk of procedure.

If there is consistently a higher SMR or an upward trend (even if SMR<100) this may be a signal of a problem.

HSMR is viewed as an unreliable way of comparing or ranking trusts, it only compares against a national standard. It is meant to signal a problem, not diagnose one.

SHMI is an NHS-produced metric designed after a review of HSMR which was felt by many to be inconsistent and a poor indicator of performance.

The principal differences are that SHMI takes into account more variables particularly co-morbidities and the emergency/elective split of admissions.

SHMI records deaths up to 30 days post discharge, combining national HES data with data from the Office of National Statistics.

The death is attributed to last admitting Trust and includes all diseases in diagnostic groups and all palliative care patients. There are “contextual indicators” which are also given with the data.

• % spells with a palliative care code

• % deaths with a palliative care code

• Deaths within 30 days of elective admission

• Deaths within 30 days of emergency admission

• Deaths in and deaths out of hospital

• Spells within each deprivation quintile

• Deaths within each deprivation quintile

Every quarter, a years’ worth of data is published by the Health and Social Care Information Centre (HSCIC).

The data when published is 9-12 months old, and an individual trust SHMI will be described as “as expected”, “below expected” or “above expected”.

Typically, Organisations present their SHMI data every quarter and also divide it down to individual specialties so that any signals that appear can be picked up early by the specialty involved.

The SHMI was expressly developed as a “smoke alarm” – again, not to diagnose a problem, but to flag if something should be looked at further. Trusts are then expected to have their own detailed dashboards locally to probe further into whether the SHMI is flagging a genuine problem and if so, its origins.

Organisations now have access to a more sophisticated Index of both mortality and morbidity, CRAB, to provide this local dashboard and root cause analysis.